This week’s lens-artists photo challenge (Travels and Trifles) invites us to share our photo editing process that aids in the realization of our artistic interpretations.

The side-by-side images below (Nikon D750) were part of a nature walk that began with an intention to create in-camera double exposure photographs. As you will notice only one of the photographs below was created in camera.

After the initial adjustment and cropping edits within Capture One 21, the final images were created using the Analog Efex Pro 2 software.

Often when I walk away from the editing process with a bit of frustration, I call to mind a mantra introduced to me by the photographer, Bruce Percey, “you can’t make a bad photograph good, but you can make a good photograph bad.

I have often found that what is “forgettable” and that which is “favorite” often times is grounded in the subjective experiences of the photographer and the viewers.

“– in short, the period was so far like the present period,

“that some of its noisiest authorities insisted on its being received,

“for good or for evil, in the superlative degree of comparison only.” ~Charles Dickens, A Tale of Two Cities.

Quote from Charles Dickens’, A Tale of Two Cities, and images submitted in response to Travels and Trifles first photo challenge for 2021.

The images above were created through the use of multiple exposure, both within camera and through digital editing. This Double Exposure project was inspired by the belief that images give voice to the emotional pain of COVID across the globe. While this virus does not discriminate, the number of people who are most impacted during this time are those who live within impoverished communities—dense housing projects, reliance on public transportation, low income, limited access to medical care and sick leave, employment instability, and rates of non-communicable diseases and illness.

The phoenix that may arise from the flames of inconsolable grief is an awareness of the inequality aggregation of these social and economic disparities exacerbates the adverse effects of all humanity.

COVID-19 is not a pandemic. It is a syndemic.

*cited: Trans: Arthur Waley, Project Gutenberg A Hundred and Seventy Poems. Note: The above poem is from a series known as the Nineteen Pieces of Old Poetry. Some have been attributed to Mei Shēng (first century b.c.), and one to Fu I (first century a.d.).

PA Moed invites us to share images that feature a subject that begins with the letter A. Hum…can tone be a subject? Or am I being a bit of a rebel by featuring double exposure photography with “A” toned luminosity masks (amber, azure, and amethyst with their contrasting tones)?

Had I not seen erect in the river
These solid timbers of the olden time
How could I know, how could I feel
The story of that house? ~The Sarashina Diary (cited: Diaries of Court Ladies of Old Japan)

That moonless, flowerless winter night
It penetrates my thought and makes me dwell on it–
I wonder why? ~The Sarashina Diary (cited: Diaries of Court Ladies of Old Japan)

Do you see that the little night opens 1
And on the ridge of the mountain, serenely bright,
Shines the moon of a night of Autumn? ~ Diary of Izumi Shikibu (cited: Diaries of Court Ladies of Old Japan)

After autumn winds have blown away the colors of fall, the wilting landscape left behind is a sleeping yellowish-brown hue that remains until spring winds travel across glaciered lands. Between the snowfalls of winter, it is wabi-sabi that greets me throughout each day.

Travels and Trifles invites photographers to share what they find interesting about a chosen subject. This post represents current work with double exposure as an avenue to open myself to the beauty of the imperfect, impermanent, and incomplete qualities of late autumn.

Week 18 Inspiration: Weight or Mass: Heavy as a stone, light as a feather. (Find inspiration and shoot an amazing photograph.) 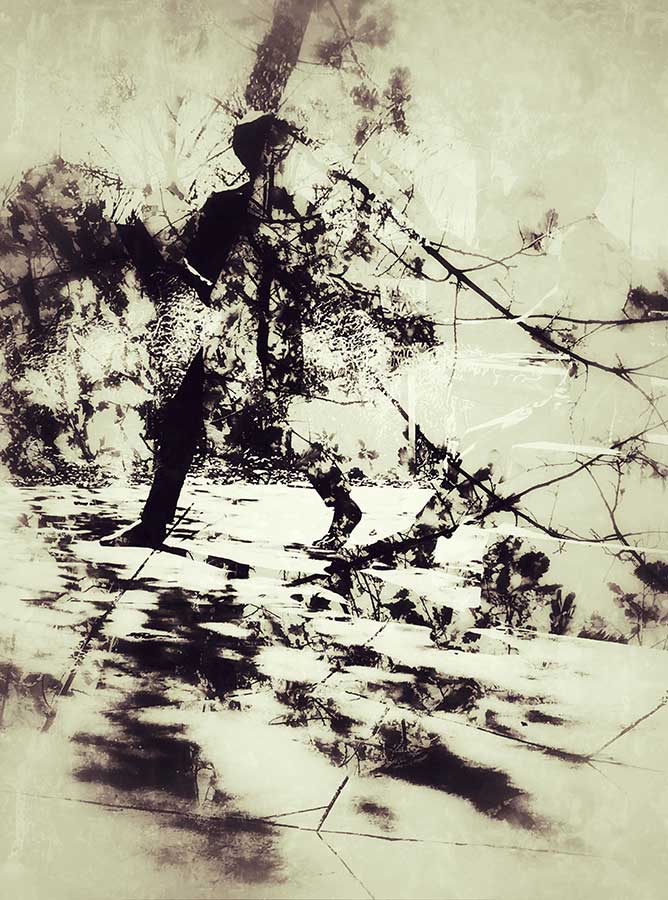 the negative, subtle, but negative response I felt in response to an UU leader’s introduction into my consciousness the concept of tribalism that eventually resulted in my decision to leave her congregation.  Tribalism is to my understanding inclusion that ensures exclusion.

Today, an answer to “why I wonder…” was found in an Aeon article entitled, “When I help you, I also help myself: on being a cosmopolitan.”  I found congruence in the worldview that all of us “are so interconnected and interdependent that we are really an extended family, and we ought to act accordingly, for our sake.”

This resolution has motivated me to share these words of Massimo Pigliucci, a professor of philosophy at City College and the Graduate Center of the City University of New York.  I hope you also find it enlightening.

One of the axioms of modern morality is that there is an inevitable tension between altruism and selfishness. The more you focus your attention, energy and resources toward your own benefit, the less ‘of course’ you can do for others. As a result, we all strive to find some balance between these two opposing demands, often ending up far short of our ideal, and feeling guilty about it. (Well, some of us feel guilty, at any rate.)

But what if this is in fact a false dichotomy? What if we adopted a different framework, according to which helping ourselves helps humanity at large, and conversely, helping others helps us as well? This is the basic idea behind cosmopolitanism, literally being a citizen of the world, which originated in Ancient Greece and was further developed in Rome. Turns out, ancient Greco-Roman philosophy still has a thing or two to teach us moderns.

The term ‘cosmopolitan’ was associated with the ancient Cynic philosophers, named after a word that didn’t have the modern connotation at all, but rather indicated a group of radicals devoted to challenging society’s norms by living simply, owning no property or housing. One of the schools of Hellenistic philosophy influenced by the Cynics was that of the much more mainstream Stoics (who lived in actual houses, and some – like the Roman Senator Seneca – were even rich). The Stoics developed the idea of cosmopolitanism into a general philosophy that guided their everyday thoughts and actions. As Epictetus, the slave-turned-philosopher of second-century Rome, put it in Discourses: ‘Do as Socrates did, never replying to the question of where he was from with: “I am Athenian,” or “I am from Corinth,” but always: “I am a citizen of the world.”’ This strikes me as something we ought to remember, internalise, and practise – especially in these times of fear-mongering, xenophobia, Brexit, Trumpism, and nationalistic tribalism.

The Stoic idea was simple and elegant: all humans inhabit the same big city, indeed we are so interconnected and interdependent that we are really an extended family, and we ought to act accordingly, for our own sake. The Stoic philosopher Hierocles came up with the image of a number of concentric circles of concern: at the centre of the smaller, inner circle, is you. Right outside is the circle of your family. Outside that is the one comprising your friends. The next circle over is that of your fellow citizens (ie, in the literal sense of those inhabiting the same city), then that of your countrymen, and finally humanity at large.

A modern philosopher such as Peter Singer talks of expanding the circles, meaning that we should aim at enlarging our concerns to encompass more and more people, thus overcoming our natural selfishness. Hierocles, in contrast, thought that we should aim at contracting the circles, bringing other people closer to us because we realise that they are our own kin. The closer we get them to us, the more the self/other dichotomy dissolves, and the more our interests align with those of our community. Indeed, Hierocles went so far as to instruct his students to address strangers as ‘brothers’ and ‘sisters’ (or, depending on their age, as ‘uncles’ and ‘aunts’), in an early form of cognitive therapy aiming at restructuring the very way we think about others – and consequently the way we act toward them.

In his Meditations, the emperor Marcus Aurelius, also a Stoic, summarised the idea of cosmopolitanism and our duty to others in the form of a logical sequence: ‘If the intellectual part is common to all men, so is reason, in respect of which we are rational beings: if this is so, common also is the reason that commands us what to do, and what not to do; if this is so, there is a common law also; if this is so, we are fellow-citizens; if this is so, we are members of some political community.’

This is what the Stoics captured in one of their fundamental slogans: ‘Live according to nature.’ It doesn’t mean that we should go around naked, hugging trees in the forest, but rather that we should examine human nature and live according to it. And human nature is fundamentally that of a social being capable of reason. (Notice that I said capable of reason, some of us employ such capacity more often or more keenly than others…) It follows that living according to, or in harmony with, nature, means doing our part to use reason to improve society. Whenever we do so, we at the same time make things better for us (because social beings thrive in a functional and just society) as well as for others. Which means that the modern self/other dichotomy is far too simplistic, and in fact misleading, because it artificially pits the interests of the individual against those of society. Of course, there will always be specific cases where we have to choose between the immediate interests of, say, our children and those of strangers. But keeping in mind that in the long run our children will thrive in a flourishing society helps to shift our way of thinking from treating life as a zero-sum game to seeing it as a cooperative one.

Stoic cosmopolitanism should not be taken to imply that the ideal human society resembles a beehive, where individuality is subsumed for the benefit of the group. On the contrary, the Stoics were keen defenders of human freedom and very much valued the independence of individual agents. But they thought that the freedom to pursue our individual goals, to flourish in our own way, is predicated on the existence of a society of similarly free individuals. And such society is possible only if we realise that our collective interests are broadly aligned. We might be from Athens or Corinth (or the United States or Mexico) as an accident of birth, but in a deeper sense we are all members of the same global polis. We would be well advised to start acting like it.

This article was originally published at Aeon and has been republished under Creative Commons.