“The Dragon is one of the four spiritually endowed creatures of China, the others being the Unicorn, the Phoenix, and the Tortoise. There are four principal Lung or Dragons–the Celestial Dragon, which supports and guards the mansion of the Gods; the spiritual Dragon, which causes the winds to blow and the rains to fall; the Earth Dragon, which marks out the courses of rivers and streams, and the Dragon of the Hidden Treasure, which watches over wealth concealed from mortals.

“…from a symbol of spiritual power from whom no secrets are hidden this dragon becomes a symbol of the human soul in its divine adventure, ‘climbing aloft on spiral gusts of wind, passing over hills and dreams, treading in the air and soaring higher than the Kwan-lun Mountains, bursting open the Gate of Heaven, and entering the Place of God.'”

Looking at the moon and stars we are seeing our own mind.

Thich Nhát Hanh, The Other Shore

Week 28 Story Telling: Your Culture (Photographers participating in the challenge come from nearly every country and culture. Tell us the story of your culture.)

Week 27 Inspiration: Gratitude (What are you grateful for? Show us.)

As I review the blogs posted in August, I noticed an increased shift away from black and white images to color. I attribute this to the increased “focus” on the various elements of contemplative photography and an intention to seeing what is as opposed to compositional elements.

a last nearby song

For about a week I’ve been “fettered” by migraine variables that have had a negative impact upon all phases of my life.  During those moments of more clarity I’ve mentally processed Raj’s 15th xdrive photo lesson with a bit of tribulation.  The heightened sensitivity to light hindered any motivation to pick up my camera and position myself where the source of the light would face my camera.  Oh…ouch…  Yet, as I watched last night’s sunset I found myself awed by the colors of the sky and able to recall Raj’s words, “backlit conditions allow us to create great silhouettes. Sharp focusing on the objects whose silhouettes you are shooting is very important…”

The initial raw image was created with the camera set on manual.  Post-editing included cropping, adjusting dark and light settings, contrast, and nudging saturation, clarity, structure, as well as, sharping.  I also went into Color Efex Pro 4 and played around with tonal contrast, detail extraction, and reflector Efex.

Thank you Raj for this assignment as I was able to move away from myself for a few minutes and connect with the beauty of this backlit evening sky.

Chat about the snow

and summer is no more 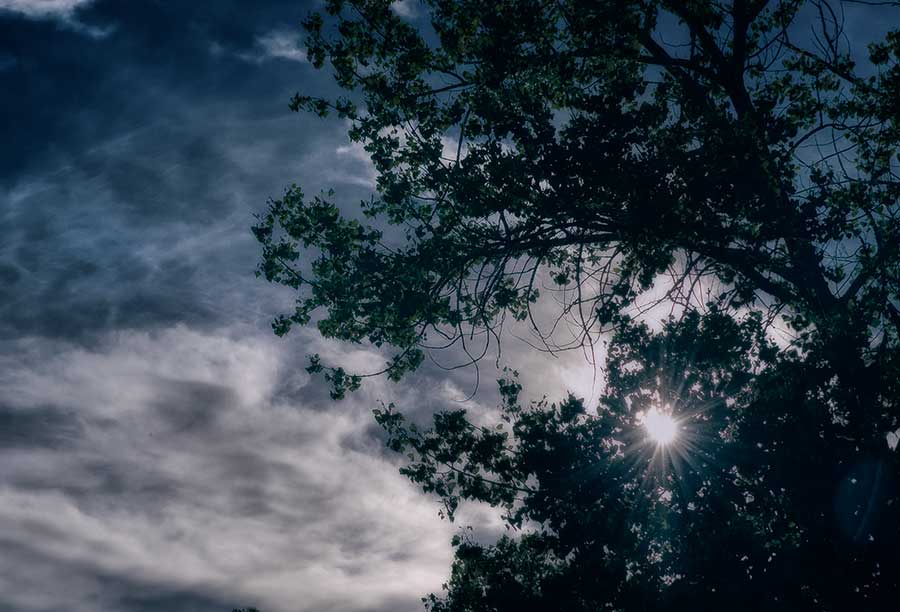 “When I look at the trees in front of me, my mind does not go outside of me into the forest, nor does it open a door to let the trees in. My mind fixes on the trees, but they are not a distant object. My mind and trees are one. The trees are only one of the miraculous manifestations of the mind.”